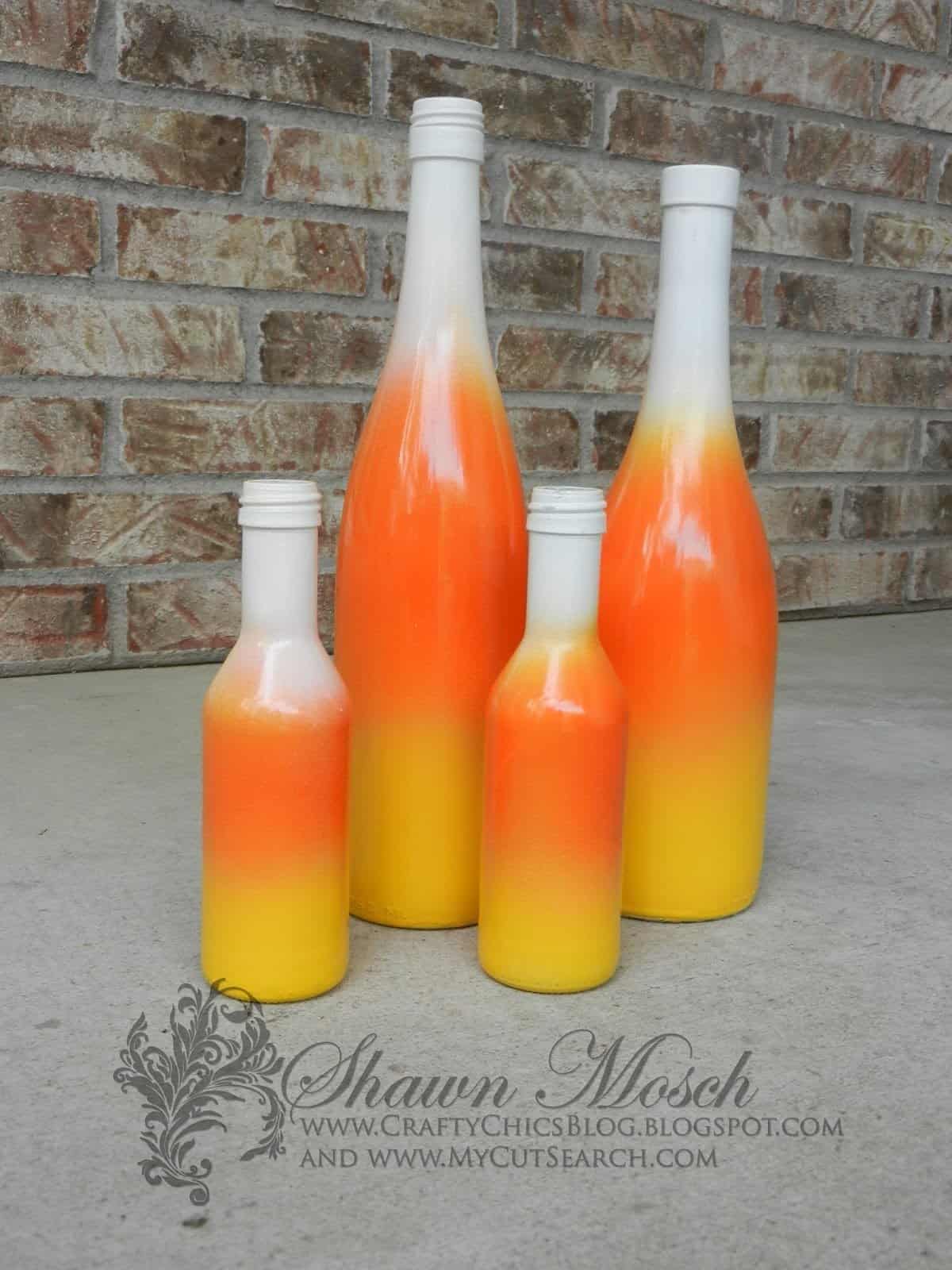 We have all seen the posts on Pinterest for the Candy Corn Wine bottles.  I don’t drink wine, but as soon as I mentioned that this was a crafting idea I wanted to try, my sisters were more than happy to help me out by supplying the empty bottles.

First off, I have to admit . . . I am not a painter!  Yes, I know that this project uses spray paint and not a brush/canvas/paint . . . but I still thought “there is a chance I could totally screw this up”.  More on that later.

To start with, I cleaned the bottles.  I soaked them in water with some vinegar. Most of the labels peeled right off, but for some of the more stubborn ones I used Goo Gone.  I had the bottles on a towel and would pour a little on the bottle and let it sit.  Then with a little elbow grease, the residue came off.

Also, make sure to cut off any metal that is left from where the cap was sealed onto the bottle.  I used a box cutter to carefully cut through the little rings that were at the top of the bottles and to get them off.

Now that I had clean bottles, I was ready to take them outside to spray.  First coat was going to be to cover them in white.  I wanted to do this, especially for the dark bottles, so that they had a nice consistent background.

I took a box and torn one flap off and that became my spraying area.  (see photo above) This helped so that there was not spray getting all over everything in the backyard.  It also made a nice place to let the bottles sit and dry.

Coat with white.  Let sit to dry.  Go have lunch or do some laundry . . . or take a nap . . . then you can come back for the next step.  You don’t want to do the next color too soon or the white will still be wet and you will have drips.

Now it is time to come back and spray the middle section with orange.

There were a couple of times while doing the project that I think I got to excited that it was actually working out and that caused me to not focus as much.  I shot some orange RIGHT into my perfectly white top. Or when I had my hand too close and the orange kind of dripped. I think now that I feel better about how this first project went I would be willing to try some more. Plus practice makes perfect!

If you over spray the orange like I did, you can come back with the white to cover it. I suggest waiting and coming back later to do this. I did not, so I have one bottle where the white is now dripping into the orange so then I tried to save it by spraying more orange and now that looks weird too.  (see photo below and the bottle on the far left).  I guess when I set these out, I will turn that bottle so the drip is in the back, or since I had four other bottles that turned out good I could just not use the drippy one.

Let this dry . . . again, go take a nap or work on some other project.

Now for the yellow.  Since I did not want to overshoot the yellow into the orange, and I wanted to be sure I got the bottoms of the bottles, I held each bottle and sprayed down into the box.  This did mean I had to take my time a little more since I could not set the bottle down right away, but I think it was the best way to be sure that I did not cover too much of the orange.  I could not hold the spray paint, the bottle and take a picture so you will have to use your imagination.

After the yellow was done I let them all sit in the box for a while. Then I moved them into the garage to dry overnight.  I set them on the flap of the box that I torn off. I actually decided to keep the box in case I decide to do another spray paint project again.

I think (except for the one that got drippy, which I ended up tossing out) they turned out cute! (the drippy one is on the far left)  So one bad one out of 5 isn’t too bad . . . let’s just get rid of that one drippy one . . .

I put a couple on our front entry table with a scented candle that has rhinestones on the jar. I also brought a couple into work to decorate my desk.  Here are how the ones in the front entry look . . .

I would say this is a Pinterest inspired project that was a success!  If any of my friends or family want to empty some more bottles, I would do this Candy Corn wine bottles project again. This could also be fun for a wedding. Spray the bottles in the colors of the wedding and place on the tables.