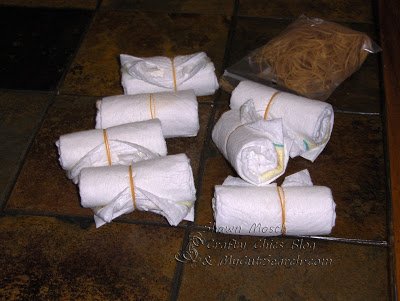 Yesterday I showed you how to get started building a Diaper Cake.

The question I am asked the most  about this project is “How many diapers should I use to make a diaper cake?”  The answer to that is in the post I did yesterday . . . Get Started Building a Diaper Cake . . . just click HERE.

Today let’s turn that pile of diapers into tiers of a cake.

Let’s start off with 7 of our rolled up diapers.  We need to stand them on end placing one in the center and the other six in a ring/circle around the center one as shown in the next image.

This is your top tier of your cake.  See how nice it looks now that all of the ends are tucked towards the inside.

To make the next tier, just repeat the steps you just did for the first tier.

Then start to add another ring/circle of diapers around one of these so that the next tier grows one ring bigger.

Now you have your First and Second tier done!  Because of the size of these tiers and the fact that the rubber bands hold things together pretty well, you can pick up the first or second tier pretty easily and move them around, but when we get to a third or fourth tier they become a little less stable, and this is why I like to place my entire cake on a tray so that you can lift it up and move it around without any of the tiers coming apart.

So, let’s get that tray out now and build another layer like we did for the second tier and place it on the tray.

Then let’s add another ring/circle of diapers around that to create a layer the size of the third tier. Since I did not have a rubber band large enough to go around this layer, I tied some white gift wrapping ribbon around it.

I think you can see that these layers are getting pretty big.  I don’t want to move this one so I am going to start placing around ring/circle of diapers around this one to be my fourth and bottom layer of the cake.

I wish I had rubber bands large enough to go around these layers, but the ribbon does the job and it will all be covered up when we decorate the cake.

Once all four layers are stacked this is how the Diaper Cake will look.

Remember, you don’t need to go this big with yours.  I made a two tiered cake for a co-worker so that we could put it on her desk.  I just wanted to go really big with this one since I am hosting the baby shower and it will also be a centerpiece at the party.  If I was doing this to give as a gift I might just to a two or three tiered cake.

The question I am asked the most  about this project is “How many diapers should I use to make a diaper cake?”  The answer to that is in the post I did yesterday . . . Get Started Building a Diaper Cake . . . just click HERE.

Now we just have to decorate it!  I think we will save that for tomorrow.