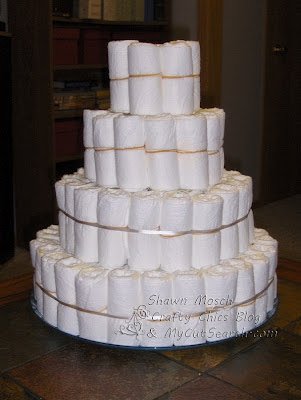 I am hosting a baby shower this weekend, and I decided to make a Diaper Cake to place on the gift table as a centerpiece.  I did this for a shower I hosted about 3 years ago, and afterwards I had SO MANY people ask me how I made the diaper cake that I decided that this time around I would do a DETAILED blog with step by step instructions.

To get started, you will need some disposable diapers, rubber bands.  I also like to get an tray to use to put the cake on to make it easier to move around.  If you don’t want to use a tray, you could cut a piece of cardboard the size you will need.  This tray is about 16″ in diameter, and I will be making a 4 tiered cake.

I like to use the size 2 diapers.  The size 1 diapers seems so small, and depending on the birth weight of the baby, they could outgrow them very quickly.  Size 2 is for a baby from 12 – 18 pounds.

I do like that most diapers will indicate right on them what size they are.  In the diaper in the picture to the left, you can see there is a 2 in the circle.

The next part of the process is the most time consuming . . . rolling up all of those diapers!  I like to take a stack of them when I sit down at night to watch television and roll them.  It is something that you can do without much thought so it is good “television work”.

I start by placing the diaper down with the printed image up.  The printed images are on the front of the diaper.  Then starting at the bottom I roll it up like a jellyroll and place a rubber band around the center.

Now, if the image that is printed on the diaper happens to match the theme of the Baby Shower, and you want to roll them so the front side is showing, that is fine . . . I have seen some done this way also, but for my purpose the image would clash with the theme of the shower so I like to roll them to have a nice white diaper and then I can decorate it with any colors and images I want.

Once you have several rolled up you will have a pile like this . . .

The next step is building the tiers of the cake.  Because I don’t want this post to get too long, I will show you that part tomorrow.

This project can be found on Pinterest by clicking HERE.