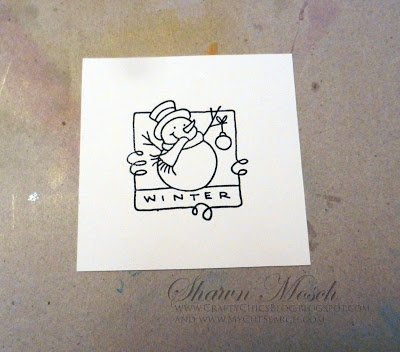 I don’t consider myself a stamper, but I have recently been trying to do a little more with the collection of stamps that I have gathered over the years.  Seriously, I would hate to see how many stamps I would have it I WAS a stamper.

To start off I stamped this snowman image on a white square of cardstock.

I stamped the image a second time and cut around it.  I am going to use this second image as a mask.

I placed the image I am using as a mask over my stamped image, and I used two blue inks and applied them in a circular motion with a foam pad.  This gave a really soft background color.  (sorry the photo is so dark)

If I thought there was too much of one color, I just added more of the other until I got an effect I was happy with.

When I removed the mask it looked like this . . .

Now I could grab my markers and color in the hat, scarf and ornament.  Once it was colored in I decided to add some dimension to the ornament by adding a drop of Dimensional Magic.  I love this stuff!  It adds just a little dimension and shine to anything.  You can see a drop of it on the ornament in the image below.

Here is another snowman I made.  I have kind of gotten into the habit of making more than one card at a time.  Often I am using a sheet of 8 1/2″ x 11″ cardstock cut in half as my base, so it just makes more sense to make 2 cards at once.

Once the Dimensional Magic dries it is clear.  I took the next photo so you could see how it gives some shine and a nice rounded shape to the ornament.

For the base of the card I used a light blue cardstock that I cut in half, and then folded each half in half.

When I placed the snowman image on top of the base there was a lot of empty space at the bottom, and I did not know what to fill it with so I decided to trim off an inch of the base and make the card more square.

Then I layered the snowman image on top of some colored corrugated paper.  This added some nice color and another layer of dimension to the card.

Even though there were several steps to this card, it really did not take that long to make.  Since I was cutting everything to make multiple cards that really helped to speed things up.