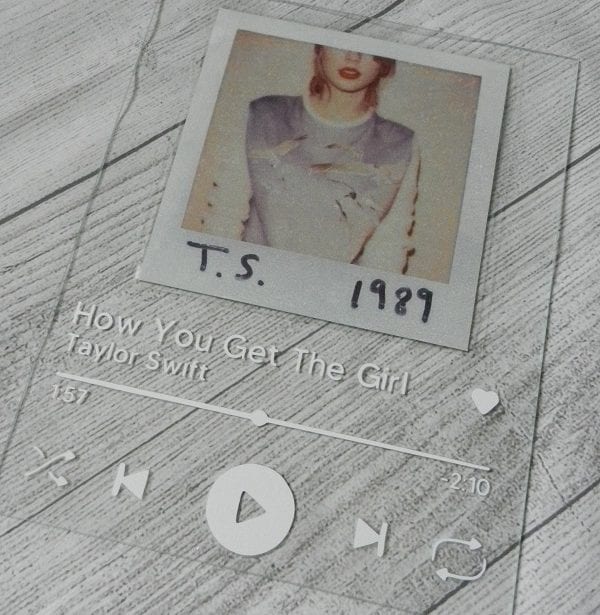 Have you seen the Spotify glass art projects that are trending right now? I have seen several different tutorials on these, but I had not jumped into making one for myself until my daughter wanted some for her and her friends. I am in no way claiming that my version of this Spotify inspired project is perfect but I did learn a few things that I want to pass on to all of you!

With this project I am actually going to show you some things that kind of went wrong along the way and how we course corrected to make it work. I think that sometimes crafters need to see that things don’t always work out perfect, but you can salvage them to make them a project that works.

Information on the supplies

I have seen many of the tutorials for this project which say to get a frame from the dollar store and just take out the glass. Here is why I DO NOT RECOMMEND THAT. The edges of that glass are not meant to be exposed and you could easily cut yourself on the edges. This is why I recommend if you want and unframed look you purchased a clip frame like the one showed in the image above. These are designed to have a smoother edge on the glass.

We started off on this project planning to use white permanent vinyl, which is why you see that in my supplies photo above. Some of the pieces were so small and hard to transfer over to the glass that we actually changed course and went with using white iron on vinyl. This is not a practice I would recommend on a regular basis, but for this project we got it to work.

Also, we started off with clear printable sticker paper because we thought that would look best on the clear glass. There were some of the images we were working with where you could see through the image and it just did not look that great. Additionally, when it came time to think about how to hang this on the wall there was no good way to hid the command strip that we wanted to use on the back. If I did this project again, I would do it on a white printable sticker or vinyl decal paper.

While in Design Space I inserted a square into my project, and unlocked it to make it a rectangle. I made the rectangle the same size as my glass frame, 8 inches across and 10 inches down. You can see this shape in the image below. I made it blue so that I could design my Spotify art piece to fit inside the dimensions of the glass and better visualize the project.

Next I found the icons for the Spotify buttons by doing a Google search for Spotify buttons and looking under the Images tab. There are several different variations, some with the play icon and some with the pause icon so choose the one you like the best. Upload the image to Design Space and clean it up by removing the background. If you have never done that before, I have a detailed tutorial for that HERE.

For the font I used for the song title, artist name and running time for the song is called Made Tommy and you can download that from DaFont.com which is an amazing site with thousands of fonts to download. Once you download them you have to install them to the device you are working on, then restart Design Space and they will be under System Fonts. I have a video on how to do this on the computer and on the iPad.

After the project was designed, we first cut the whole thing from permanent vinyl, but we found some of the numbers to be too small to easily transfer over to the glass. It was just too hard to get those tiny pieces to nicely come off the vinyl backing and then on to the glass.

That is when I decided to try using iron on vinyl. The reason I went that way is because the iron on vinyl already has a carrier sheet connected to it, which makes everything so much easier to move and place on the final project. I reached out to my iron on vinyl supplier, and they actually did not recommend this process but I wanted to at least try it.

I placed a towel down on in the inside of my heat press. Since I knew the glass would get very hot I wanted to be careful to make sure that it was protected and did not shatter. If you try this, make sure to NOT apply pressure to the glass. I lowered the top plate of my heat press down, but did not lock it. This way I would get the high heat of the press without the pressure. I went about 15 seconds, since this was kind of an experiment. Since the glass was hot, when I took it out of the press I grabbed it with a towel so I would not burn myself.

After I removed the carrier sheet I did give it another 20 seconds in the heat press, with a sheet of parchment paper over the top. Now we had to let all of this sit and totally cool down. I did not want to bump anything while it was still hot and have it shift. I also wanted to glass to be totally cooled down before adding the album cover art portion.

We found the Spotify album cover art and uploaded that image to Design Space. I saved that image as a Print then Cut image so it would print the cover art and then cut a square around it. This would allow me to stick the cover art in place on the glass. We printed this on a clear sticker sheet so that we could easily apply it to the glass. The thing we did not think about was how see through some parts of the image were due to printing on clear sticker paper. If we were to do this project again, I would print on white sticker paper.

What we ended up doing was cutting a piece of white cardstock to place behind the album cover art. This helped in two ways. The cover art was now not see through, and it helped us to hide the Command Strip we applied to the back to hang the Spotify glass art on the wall.