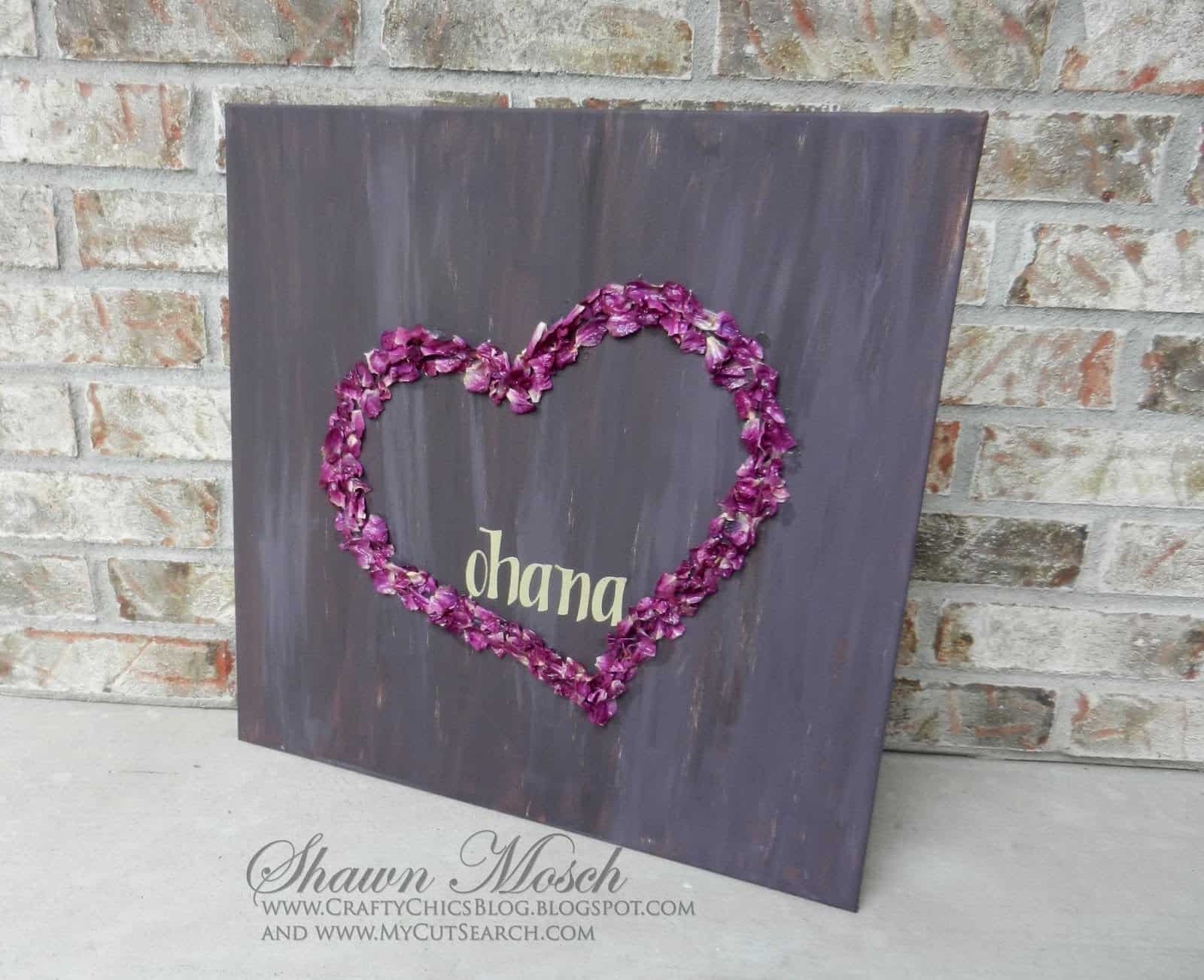 Sometimes when you are decorating your house you need to just wait and let the perfect idea for your home decor come to you.  That is what happened with this project.  We moved into our house almost 2 years ago, and there has been one wall in our home office that has been empty that always bugged me . . . but I also could never find the right thing to put on that wall . . . so I waited.

Last summer we took a vacation to Hawaii and I knew I wanted to do something with the leis we got at the luau we attended . . . but I did not know what . . . so I waited.

Then it all came together . . . and idea for a project that showcased the dried flowers from the leis we got in Hawaii and filled the empty space on the wall in our home office.

I started off with a blank canvas and went to my stash of paints and pulled out all of the various shades of cream and brown that I had.   First I painted the entire canvas cream.

and brush over the top of that with a dry foam brush.  Then I added another shade of brown and did the same thing.

When it got to this point, I was on the fence on if I liked the way this background looked . . . so I added more paint

Now I liked it better.  Not a solid background . . . still some depth and variance in the colors but not as dramatic as it had been.  When you are up close, there are still areas where you see the light cream, or the rusty brown color but from farther back it reads like a solid brown.  I think it has an “aged” look since it is not totally solid brown.

So now I wanted to showcase the dried flowers from the leis we saved from our trip to Hawaii.  Since I was working with three leis, I was able to pick the best flowers off of each one.  I decided to use the ones that held on to the purple color and throw away the ones that had turned brown.

I used my Cricut to cut a large heart from a piece of adhesive backed fabric I had and placed that on the canvas to use as a guide for placing my dried flowers.  (before I placed this heart on the canvas I tested it on the side to make sure the adhesive backing did not pull any of the paint off of the canvas)

Then I placed some glue around the outside of the heart so that I could start to place the dried flowers down.  I worked in sections because I did not want the glue to dry before I placed the flowers down.

Here is how it looked once I got all the way around the heart once with flowers.  When I started this project, I did not know how many good flowers I was really going to get out of the three leis, and I did eventually end up filling in more flowers, which you will see in the final photos.

Once the flowers were on the canvas I went over them with Mod Podge using a small paint brush.  This sealed the flowers so that they would not crumble if they were touched/bumped.

Since this was also sort of a “memory” of our trip to Hawaii I decided to add the word ohana to the canvas, which means family in Hawaiian . . . and it is also a bonus that the word ohana always makes me think of the Disney movie Lilo and Stitch.

I cut the word ohana on my Cricut using the Deco Foil Toner Sheets by Therm O Web.  These sheets are great!  Foil sticks to toner when you run it through a laminating machine, and these sheets have adhesive on the back too, so when you use them you end up with a perfectly foiled image that is ready to stick on your project.

When I cut these with my Cricut, I use a deep cut blade and a multi cut so that it cuts all the way through the toner sheet and the adhesive backing.

Here is what it looks like on the mat once the cutting is done.  Now it is time for the magic to happen!

Place a piece of the foil over the letters and sandwich them inside a piece of parchment paper.  Then run that sandwich through your laminating machine and look at what you have!  Beautiful foil letters!

Then I just peeled off the backing to expose the adhesive, and they were ready to stick on the canvas.

I love the way the letters shimmer when the light hits them.