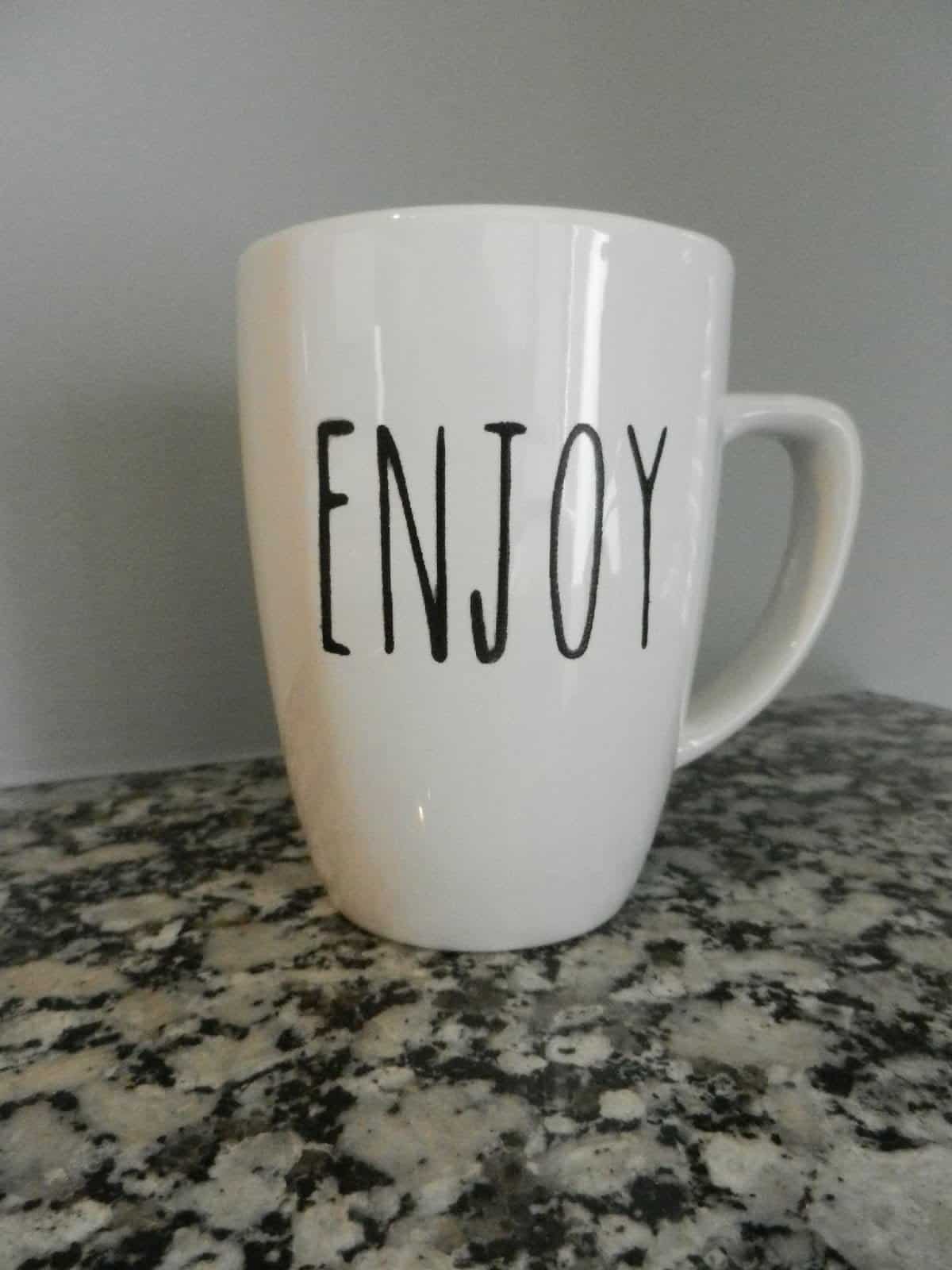 I am super excited to show you the Ikonart kit and how to make a stencil with it.  This will allow you to print an image or phrase on ink jet printer film or laser printer film. Then you will expose that print to light and make a stencil that is resuable. I thought this would be perfect for images that you want to use over and over again.

By the way, this post contains Affiliate Links to companies I have partnered with, such as Amazon. As an Amazon Associate I earn from qualifying purchases. Thank you for shopping with my links!

This is a Rae Dunn inspired font that I found on Dafont.  I wanted to use a really skinny font for this project since using those with vinyl can be so frustrating. So if I could create a stencil of a thin font it would be a game changer.

Since the size of my stencil for the cut would be small, I decided that I would set up my page layout for a few designs. This way so I could make a few stencils at once.  I had this sheet set up for the word welcome, enjoy and I also did one that said love, but I smudged it with my finger so I cut that one out and I will redo it with the next stencil I make.

Making a Stencil with Ikonart

The words were printed on my ink jet printer on the clear ink jet film from Ikonart.  There is one side that is shiny and the other side is what you want to print on.

If you would like to make a similar project, the font that I used on the cup can be found on Dafont: The Skinny from Dafont

I wish I could show you the whole process with pictures. The stencil material is light sensitive, and I did not want to take pictures of that process and risk ruining the stencils.  Once you expose the image to the light and wash the stencil, you will see how the image emerges.  I am not going to lie, it was kind of amazing to watch the image emerge from the stencil.

Here is a video from a different Ikonart project I did, just so you can see the full process of creating the stencil.

Here is my stencil after washing and drying.  You can see how the center of the letter o stays in place on the stencil.  There is actually a really thin film in this stencil material, so that the paint can push through  the open parts and you don’t have to worry about the centers of any of your letters shifting or not being pressed down firm enough.

The other really nice feature of this stencil material is that it is very flexible.  I have used other stencil materials and they are firm and stiff so they were harder to wrap around a curved surface.  With the Iknoart stencils it wrapped around the curve of this mug perfectly!  I did still run my fingers across it to smooth it down, but I could really feel that it was going with the curve of the surface, which helps to make for a much cleaner stenciled image.

I put just a small drop of the mulit surface Folk Art paint from Plaid in the upper corner of this image and then used the squeegee to move the paint over the whole image.  The paint will go through the openings and when you remove the stencil you are left with a perfect stencil!

This turned out so cute!  If I wanted to make several of these for gifts then I could just keep using this same stencil over and over.  And that one little drop of paint I used could probably have covered 2 or 3 mugs.  There was a lot left on my squeegee when I was done.

If you are a fan of some of the companies out there that sell pre-made stencils, this system will allow you to start to create your own designs.

Special deal for you!

Head over to their site by clicking HERE and be sure to use my code ShawnMosch so that you can get 15% off of your order!

If you want to see what you get in the starter kit, you can see my unboxing video below

Also, check out Ikonart on Facebook and their Ikonart Crafters Facebook Group and tell them Shawn Mosch sent you!