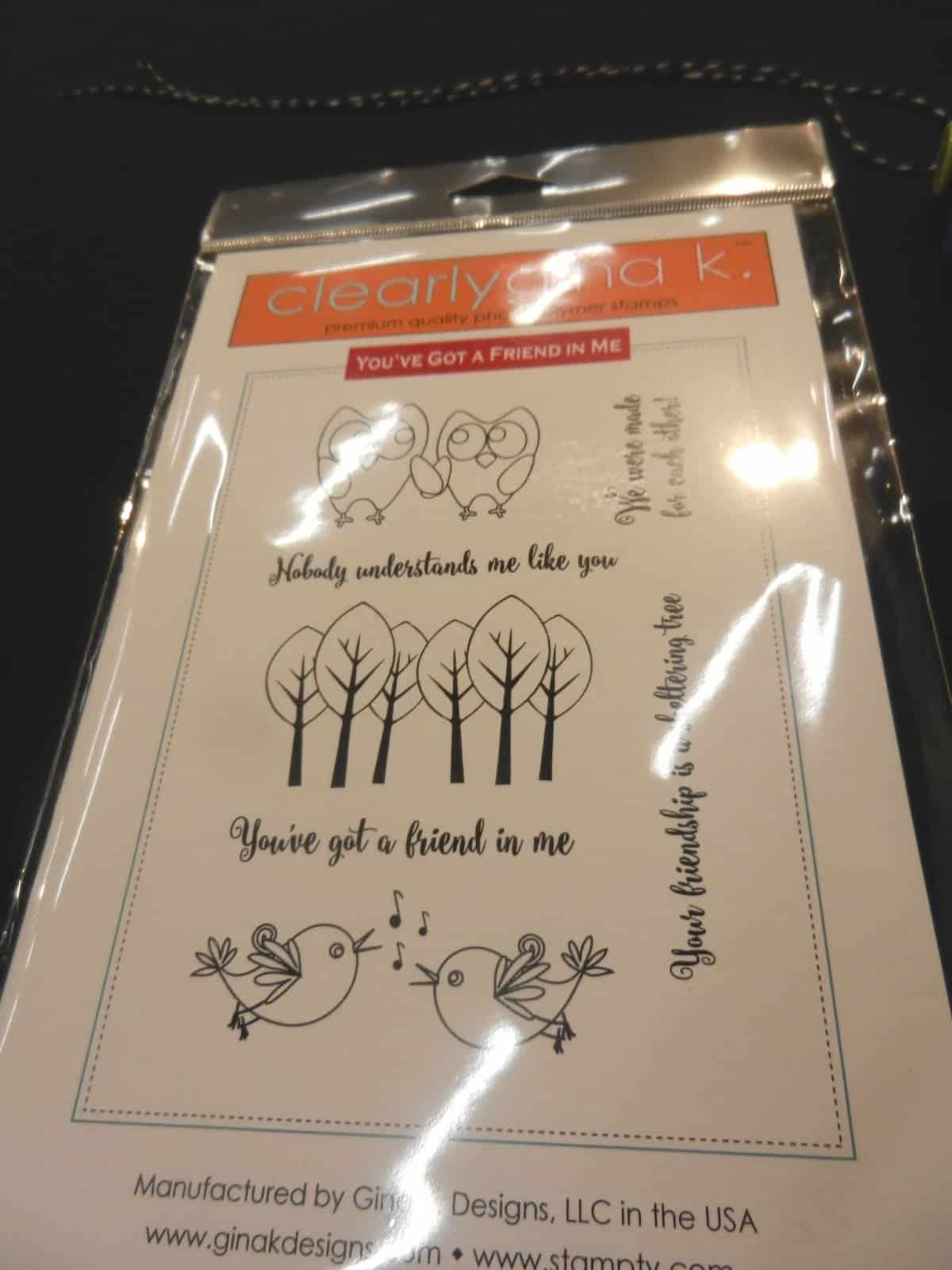 Gina K. Stamps – You’ve Got A Friend In Me

I don’t consider myself a stamper. Yes, I own some stamps, ink and pens/markers but really I mostly use the inks on the edges of my die cuts to cover up the white core of the paper that might show through. When I stamp, it is normally JUST a sentiment in black. The idea of stamping an image and then messing it up when I went to color it in scared me . . . so I just never tried to do it. Also, I see images that other people do with this beautiful shading and I would think “there is no way I can do THAT!” so I just would not try. Then there are the supplies . . . what ink do I get? What pens? I was basically overwhelmed.

That is the reason I signed up for the Gina K. classes at the Bella Craft Connections event going on at the Mall of America this weekend. I figured I could learn some tips and tricks and test stamping out . . . if I took the classes and the cards looked terrible, I would know to never try this again . . . if they looked nice then I would be opening a whole new avenue of use for my supplies.

In the class we were using Gina’s new stamp set called You’ve Got a Friend in Me.  We made three cards.  I will show you the sample cards that Gina had at her class first, and then my cards are at the end.

Layers are (from the bottom up)

5) White cardstock that you stamped your image on

Then you use a rectangle for the sentiment and back that either the same color as the base or the color used in #2 on the list above.  I love this because then I am not looking for lots of different colors and patterns and trying to figure out if they work together . . . just pick one pattern and two colors and you are good to go.

These images are for cutting sizes.  I did not measure everything out, but since I laid them all on this grid you can figure out all of the sizes you need to cut.  Each square on the grid is 1/4″ big.

Those look pretty cute!  Normally this is where I would stop and just say “Don’t do any more . . . you will mess it up” but I am going to face my fears.  Below are the pens we were working with.  I do own a blender pen, but I always thought that they were only for blending one color into another, or for when you just wanted a soft halo effect and you would blend out a harsh line you drew.

Gina taught me that with just a few pens and a blender you can CREATE pattern and interest to your images.  Below is an example of what I am talking about.  I used two different green pens on the trees below, coloring every other one alternating between the light and the dark green.  Using my blender pen I went back over them and added patterns . . . polka dots, criss cross, lines . . . what ever I wanted.  Now this is starting to look like something I would have done with my die cutting machine, cutting each tree out of a different patterned paper.

To assemble the card, just stat to adhere the layers to the base.

And now for my cards.  Personally, the owl one is my least favorite.  I feel like the dark brown was too dark.  I did like the technique that Gina showed us to use the pen to create a feather pattern on the owl.  I also used a green ad their feet and blended it out to kind of make it look like they are standing on the grass.

Oh . . . and if you have a box filled with old buttons that don’t match anything you own, cards are the perfect way to use those up!  Put some twine through them and tie a bow and you have a cute little accent.  And if you are like me and you are a messy stamper, you can place the button right where you smudged some ink to hide the mess.

I think I like the tree card the best.  And to think I consider myself a non-stamper kind of girl.  I think after this weekend that might be changing.

And the little bird card.  On this one I was going to do the body purple with green wings, but I did not stay inside the lines too well on the bird on the left so I just made him all purple.  Afterwards I decided to just accent the wings by adding some green over the top on just parts of the wings.

For the second bird I colored the wing green, and I was coming in afterwards with the purple and got to close to the wing and purple started to bleed in . . . I was so upset!  Then I watched it and thought “That looks kind of cool” so I added some more purple at the base of the wing and let it bleed into the green  I think it has a peacock feather look.

If you want to check out Gina K. and her amazing Design Team, I have included some links for you below.  Tell them Shawn sent you!