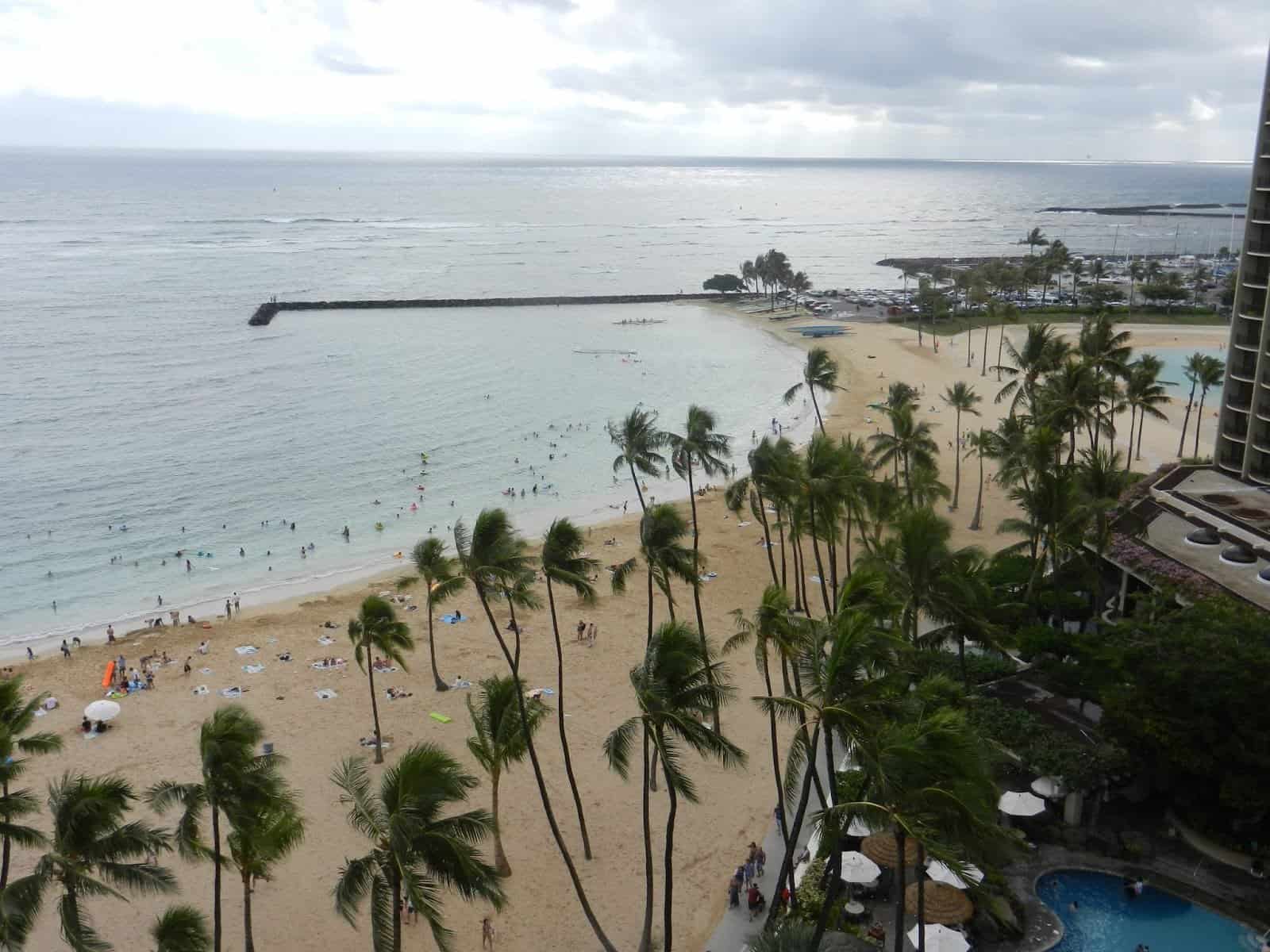 My family just returned from a trip to Hawaii.  What a way to end summer vacation!  This was the view from our hotel balcony.

The ice cream cone was from Lappert’s ice cream and coffee shop.  LOVED their waffle cones, variety of flavors of ice cream and I liked their blended coffee drink better than Starbucks.  Check them out!  Here is a link to their website and the Facebook page.

We went on several tours, and used Discover Hawaii Tours for three of our tours.  I have to say, my review of the company would really depend on which tour guide you end up with.

For the Pearl Harbor tour we had Christine from Discover Hawaii, who was friendly and personable.  Her tour was full of facts and information with a little bit of humor thrown in.  She would tell us the best place to sit for viewing different things, and even saved a few seats for our family for the parade at the Polynesian Center.

We also went to the Dole Plantation (had to get some Dole Whip) and she showed us so much of the island.  Even though the day started of raining, her smile and personality made for a pleasant day.

The next day we went snorkeling with EO Wai’anae Tours.  This is a family run company, and we would use them again.

They took us out on the boat and we saw turtles and dolphins.  Then it was time to snorkel . . . and they made sure that everyone was able to see the pod of dolphins we found swim right underneath us!

Later we dropped anchor and could swim, paddle board or even jump off the boat into the water.

They took photos with their camera, which was nice since no one wants to worry about their camera getting wet or falling overboard.  They also brought lunch for us to have out on the ocean.  The group we were with was a lot of fun to hang out with.

If you are in Hawaii and want to tour with them I have included links to their site and Facebook page.

That evening we went to the Big Kahuna Luau Discover Hawaii, This time John Jr. was our driver.  John needs to work on his vocabulary . . . every other sentence started with “Basically, ”  We were joking that if it were a drinking game and you had to drink every time he said “basically” you would have been too drunk to stand up and walk to the Luau!

Traffic was bad that night, so John “basically” tried to fill the time with jokes.  “Basically”, his jokes were bad and he sounded very scripted and not natural.  He stopped to show us an amazing view of the city from up high, and then even though he knew we were running late he “basically” did not care about that and stopped the bus, pulled over and sang us a song and played the ukulele.  Then, when we got to the Luau he made a joke about “getting laid” since they were handing out a shell lei to each person as they got off the bus.  I personally think he needs to check his crowd and drop that joke when children/teens are on the bus.  I did not hear anyone laugh at the joke.

“Basically”, since we got there late, they were wrapping up some of the activities for people to do before the main luau started.  We ended being the last people going to our seats.  “Basically” I felt rushed and not relaxed like I thought I would.  And the best food at the luau . . . the coconut shrimp that they gave us as we first came in.  Then as we got on the bus to leave the Luau, John Jr. did his lei joke again . . . “I see you all got laid” Again, not funny.  “Basically”, if this was the only tour we had done I would not be recommending Discover Hawaii as a tour group.

Luckily we went on another tour the next day with AJ over on the Big Island to see the volcanoes.  This guy should do the TRAINING for ALL TOUR GUIDES by Discover Hawaii!  He really got to know each person on the tour, and then he would point out things that he knew would interest us personally.

We had SO MUCH FUN!  If I was judging Discover Hawaii just off of this tour I would say you have to use them!

The next day was surfing.  Yes, we ALL TRIED IT.  We used Gone Surfing.  The instructors said I was doing good, but who knows.  I was able to stand up, but if I fell off the board it was hard for me to get back ON the board.  When I said I needed to loose weight, the one instructor said I just needed longer arms.

My husband was able to get up on the board too

No surprise to us, our daughter did the best.

If you want to learn to surf, I highly recommend using this company!  They really take their time and pay attention to what each person needs.  For example, when our instructor could see that my arms were getting tired from paddling back out to catch another wave, he would toe me in . . . literally.  He would put his big toe on the front of my board and start to paddle.

I highly recommend the group at Gone Surfing.  Go to their website and Facebook page and tell them Beth Mosch’s mom sent you there.

That afternoon we did my favorite activity . . . swimming with the dolphins!  We did this with Dolphin Quest.

This one the dolphin was dancing circles around us.

Not only did we enjoy a lot of activities, but we loved some of the local food . . . Lappert’s ice cream shop by our hotel was the BEST!  We had pizza one night at Round Table.

My husband and daughter enjoyed a local favorite for dinner a couple of nights . . . the Loco Moco at Cinnamon’s

It was a great trip, and I am so glad that we were able to do this and go on so many tours and special activities.  Who knows when this Minnesota family will get to the tropical island again so we had to do it up right!