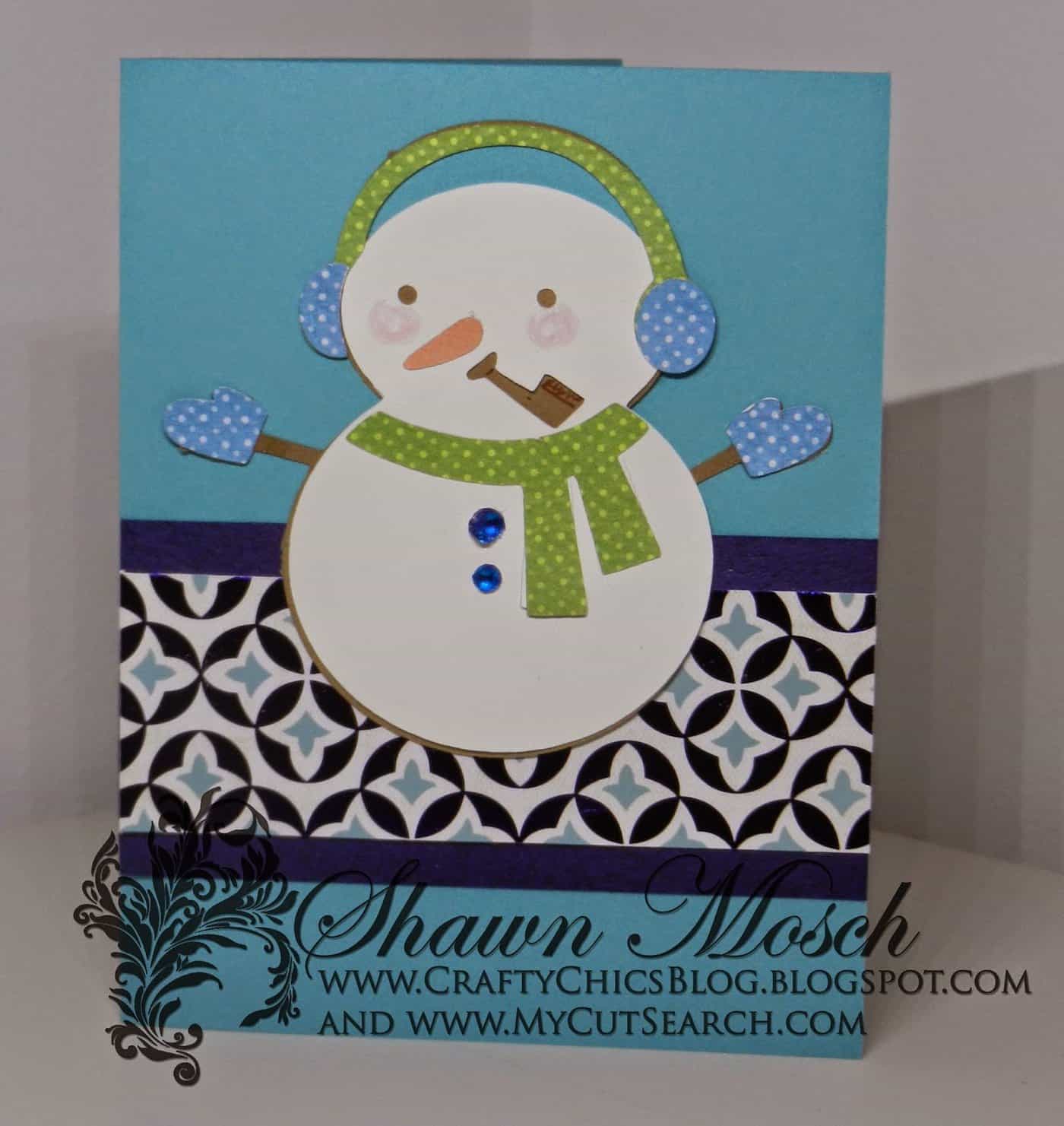 Even though I make cards, I don’t make my Holiday Cards.  I never have the time to make the 30+ cards that I send out by hand.  But this year I found time to make a couple of cards for our new neighbors and I decided I would do a “two for one” kind of project . . . two cards, one project . . . EASY and FAST.  Here is what I mean.

To start, I used one piece of teal blue cardstock that I cut in half.  I folded each half in half to create the base for 2 small cards.  Perfect!  No waste and both were cut at the same time!

I found an accent piece of paper that I cut a large strip from, trimmed it down to fit the card and attached it.  Since it was one long strip, I had enough to put some on both cards.  Again, easy and done quickly with no waste.

Now for the snowmen cuts.  One piece of paper, and cut the snowman twice out of white and and the backing piece in brown using my Winter Frolic Cricut cartridge.

If you don’t own this cartridge but want to make a similar card you could use any snowman.

{but Shawn, how will I know which Cricut cartridges have a snowman on them?}

That’s easy!  Just go to MyCutSearch.com and type in the word snowman . . . the website will do the rest!  You will see handbook previews of each and every Cricut handbook that has a snowman on it!

I don’t know if you notice, but one of my snowmen is wearing a green scarf and blue mittens, and the other one is wearing a blue scarf with green mittens.  This is because the scarf and mittens are all cut with the same layer function button on this cartridge.  If I would have just been making one card, I would have cut this layer twice, from two different colors, and then just had extra pieces that I would not have used.  But since I knew I was making two cards, I cut the layer twice from two different colors and just did a mix and match kind of thing between the two cards.  If you ever run into a Cricut cartridge where you want to break up the colors on one layer, making two cards at once is a good way to do that.

See those little tiny buttons on the snowman?  They look like I just took an individual rhinestone and set it on there, don’t they?  Well, that is NOT what I did!

I had made some tags using the Sizzix Scallop Tags die and the rhinestone sticker sheets from The Buckle Boutique.  The piece that I used for the buttons on the snowman are the little tiny circles that came out of the tags!  (see image below)

This just shows that you can cut really small stuff with the rhinestone sticker sheets, and that I save EVERYTHING!