I guess I should clarify . . . this is my first banner using my Cricut.  Remember back in the ’80’s when plastic canvas projects were all the craze?  I used to make the plastic canvas letters and create banners for my family events . . . mostly birthdays.  Well, my banner making skills are at a whole new level now that I have made them with a Cricut!

This banner is for a friend that I work with, and we are throwing her a baby shower this week.

For the base of the sections of this banner I used an image I found on my Christmas Cheer Cricut cartridge.  Yes, you heard me right . . . I used Christmas Cheer for a Baby Banner . . . who would have thought!  But look at the image . . . it is perfect! 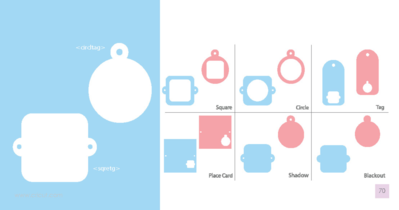 The base has the little side tabs already on it, so you can easily string the letters together, and it has cuts for an overlay with either a square or a circle so you can frame your base cut paper.  I decided to frame mine with the circle frame.  I think I cut the base at around 4″.  I used a cute teal blue, white, cream and green plaid paper. 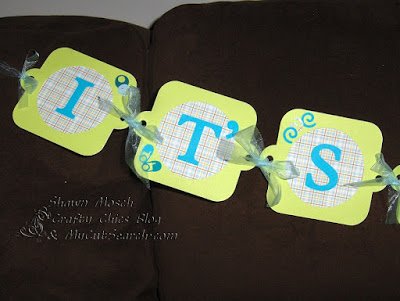 Then I cut the circle frame overlay in a green, and did the letters to spell out It’s A Boy in a bright teal.

For the spaces between the words, I used a image of a baby wrapped in a blanket, like it is being carried by the stork.  I have this on my Cricut Sampler cartridge, but the same image is also on New Arrival. 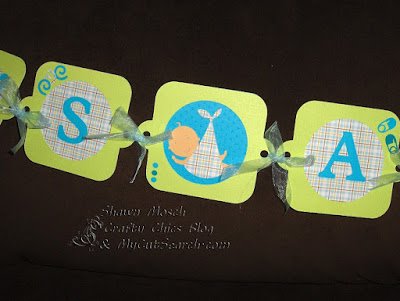 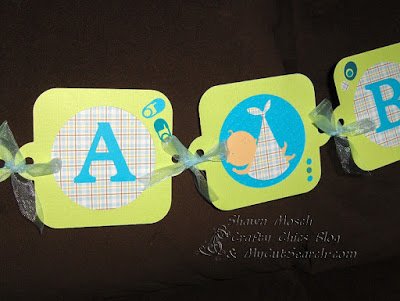 Each section has a few little accents on them . . . hearts, diaper pins, dots . . . just a little something to add some interest to each section.

Then I simply tied all of the sections together using blue tulle.  On the first and last section of the banner I left a little more tulle so that we can tie the banner up at the baby shower.

I just found out that the Scrappin Chics Challenge is a banner theme . . . I might have to enter this project into the challenge.

I am entering this into the Getting Cricky Party Favor Challenge.