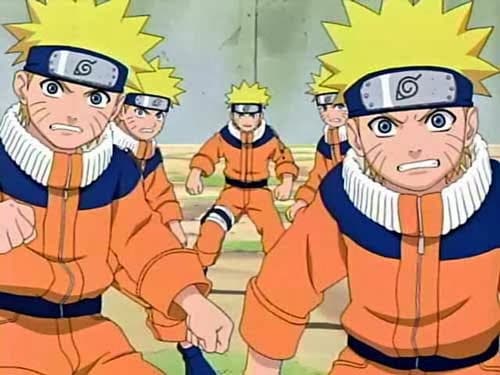 Since my kids know that I can sew, I never hear a request for “normal” Halloween costumes in my house like a witch, ghost, black cat or vampire. Those would all be way too easy! My kids will request things like dinosaurs, Pokémon characters (but never the ones sold in the stores) and more recently Naruto characters.

For those of you that do not know, Naruto is an Anime cartoon. Here is an image of the main character.

So when my son asked me to make him a Naruto costume I first searched online to see if we could just buy it. We could, but they were selling for a LOT of money. That is when we decided that I would get out the sewing machine and just make it.

Now, I am a smart woman . . . why make the entire thing when you can start with some basics and alter them. We found an orange hoodie to use for the upper part of the costume so that I did not have to make the main body of the costume. Then I removed the hood and the outside pockets, but saved that fabric in case I needed it later.

Next I did the blue accent piece that goes around the shoulders. I got my inspiration from shirts and dresses that I have made that have an interior yoke piece that is usually attached to interfacing. I made pattern pieces out of paper and put them over the jacket while my son had it on to be sure that it would all fit correctly. It took a little bit of trimming here and there, but we got it right. Then I cut two of all of my pattern pieces, sewed them together leaving the collar edge unsewn and turned then turned the whole thing right side out. This gave me a nice clean edge on the outside. I attached this entire piece to the jacket and topstitched it down.

Then I used white fabric to create the collar, along with some of the fabric I removed from the original hoodie. It is just a basic rectangle with pillow filling inside of it to give it the dimension that it needed and I used two layers of interfacing on the inside to make it very stiff so it would stand up. Once I had the basic rectangle sewn and stuffed, I stitched straight lines every couple of inches apart to create the “quilted” look. Then I simply attached the collar where the hood used to be. This also covered up the rough edges of the decorative blue piece that went around the shoulders.

Now onto the accents . . . on one shoulder there is a white circle, which I cut out and attached with an appliqué stitch. Then I used gray thread to topstitch in the swirl inside the circle. I repeated all of this with red fabric for the larger red circle on the back of the jacket. Then I cut a long rectangle of blue fabric, finished off the edges and attached that to the bottom of the jacket.

My son was so happy with the way the jacket turned out, he asked me to make matching pants and shoes. The shoes were more of a challenge of figuring out how to make it all work, but I think I will save that for another blog.