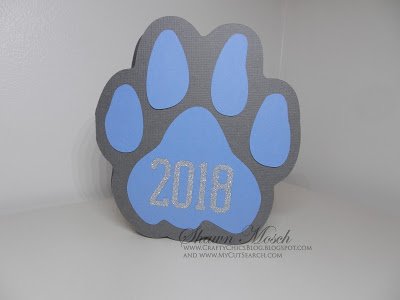 Graduation season is coming, and I wanted to make a few fun cards for my daughter’s friends who are graduating this year.  Since their school mascot is a Jaguar, the paw gets used a lot on school items so I thought why not turn it into a card.

First, I found a paw shape in Cricut Design Space.  Then I made it the size I wanted the card to be, and duplicated the base piece.  Then I mirrored the base that I duplicated and moved it right next to the original until they were touching.  Then I welded them together at the point that they touch.  I also added a scoreline at that same location so that the Cricut would put a nice line for me to fold the card on.

Next I cut the blue shapes for the paw.  I also did a smaller version of the base for the inside of the card so that I could have the Cricut write a sentiment inside the card.

Next, glue the piece with the sentiment to the inside of the card.

Then add the blue pieces to the front.  I also cut the numbers 2018 out of a silver glitter sheet that has adhesive on the back.  This made it so easy to apply the numbers to the front of the card since the entire back side was already sticky.  ***HINT:  Place the 0 or the 1 first, so that you can space things out nicely from the center of the card.  If you stick the 2 down first and were too far to the left, the whole year will look off-centered.

If you want to make this card for yourself, the project can be found at the link below